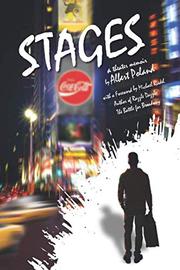 A Midwestern boy grows up to be the ultimate New York theater insider in this debut memoir.

From his early days in Indiana and Michigan, Poland was fascinated with show business. He started a Judy Garland fan club as a young man in the mid-1950s and even met the legendary star backstage. After a stint in college to appease his parents, the author moved to New York City with a friend, came out as gay, and transitioned from small roles in summer stock to a more lucrative career backstage. Poland began work as both a producer and general manager, booking college tours of the Off Broadway hit The Fantasticks and forming a relationship with New York’s avant-garde Café La MaMa troupe. This work, essential to any professional production, was occasionally glamorous—spending evenings at Studio 54 and rubbing shoulders with theatrical legends like Lucille Lortel and Sam Shepard—but always demanding, requiring late nights of crunching numbers, securing funding, and ensuring each show got the press coverage it deserved. As the edgy theater of the ’60s gave way to the more sanitized Broadway of the early aughts, Poland battled with the changing performance scene and his own alcoholism. He watched friends perish during the AIDS crisis of the ’80s and introduced the scrappy dynamic of Chicago’s Steppenwolf Theater Company to a nationwide audience and the Tony Awards by bringing its adaptation of John Steinbeck’s The Grapes of Wrath to the Great White Way. Though the author retired in 2007, his memories are fresh and his voice as a writer is vivid, with amusing anecdotes about everyone from Vanessa Redgrave (who had her own unique set of demands while playing Mary in Eugene O’Neill’s classic Long Day’s Journey Into Night) to Hugh Jackman (whose star turn as song-and-dance man Peter Allen in The Boy From Oz took Broadway by storm). But more than a series of dropped names, Poland’s fast-paced memoir offers theater history, an in-depth chronicle of everything from counterculture-driven, low-budget spectacles to today’s star-studded New York stages.

A funny and inspiring behind-the-scenes perspective on the bright lights of Broadway.