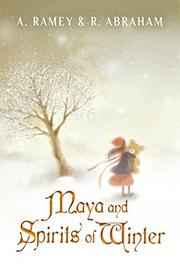 MAYA AND SPIRITS OF WINTER

In an overly sweet opening, a perfect baby girl is born: “It was as if the baby (sic) new skin was impregnated with sunshine and it radiated outward.” The baby, Maya, is soon afterward diagnosed with scoliosis. Time passes rapidly, and the night before Maya’s sixth birthday, her mother gives her a magical green orb that brightens when Maya holds it. Later that night, her mother mysteriously leaves without explanation. The story progresses quickly through the years, as Maya’s father pursues his Ph.D. in microbiology and Maya takes up snowboarding. She also has a recurring dream of “lightening bugs” with faces that suddenly turn ugly, and she glimpses unusual animals in the snow. Maya meets Dima, a boy from Russia who shares with her some of the folk tales and customs of his country. Eventually, she learns that her visions are of characters from these tales, the Spirits of Winter, who seem evil at first but then help her when she competes in a national snowboarding competition. Blending Russian folk literature with a contemporary setting makes for an intriguing premise, yet the story is underdeveloped and poorly paced. The rushed chapters don’t provide enough space for readers to connect with the characters or understand the confusing mythological aspects of the plot. Before she leaves, Maya’s mother tells her, “Once I became pregnant with you, the human and the beginning of time became one,” a vague but important-sounding statement that is never adequately explained. Maya’s scoliosis, which seems a crucial trait at the beginning, is barely mentioned; it doesn’t affect her snowboarding or provide much of an obstacle for her to overcome. The writing is unpolished, marred by frequent punctuation errors, incorrect word choices (“bazaar sight”), and inconsistent changes in verb tense: “He closed his eyes like he’s seeing her at that moment.” Although Maya does eventually learn the reason for her mother’s departure, the promised reunion is put off until a sequel, resulting in an abrupt ending to a short book.