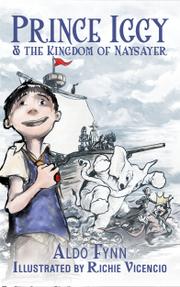 Prince Iggy and the Kingdom of Naysayer

A lonely boy learns how to stand up against a cast of mean bullies in Fynn’s debut middle-grade novel.

Iggy Rose is living a life of hell at the Naysayer Academy. In a school where only bad children survive, not only are the children bullying him, but the headmistress is giving him a hard time, too. Poor Iggy is thrown down a garbage chute by the spiteful Teddy, where, unbeknown to his persecutors, he’s rescued by a mysterious man who insists that the young boy is a long-lost prince who must now stand up and reclaim his kingdom. That’s not going to be easy given that Iggy isn’t convinced he’s a prince and the King of Naysayer has stolen a magic ring from his finger. There’s plenty of knockabout farce to enjoy with Iggy’s new friends: a professor who’s losing his mind, a sea captain whose strength has diminished, a fortuneteller who can’t read the future, and the wonderfully named Henry O’Henry, whose poetic powers are wasting away. Only by reclaiming the ring and his throne can Iggy and his friends halt the withering of their powers and escape the evil Kingdom of Naysayer. The underlying message that bullying never pays is handled with skill, and a humorous approach keeps the story light. The black-and-white illustrations resemble watercolor sketches and possess a rustic charm that complements the tale. It won’t be long before readers are cheering for Iggy as he gets back at the nasty people who’ve made his life a misery at the academy. A second book, Iggy and the Tower of Decisions, follows the intrepid hero’s adventures in his new role as Prince Rose of the Rose Kingdom.

An entertaining fantasy with a quirky, inventive storyline that shows how things invariably turn out badly for bullies.