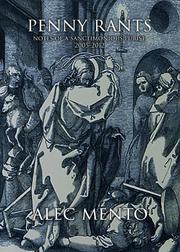 An assemblage of spirited opinions from a political blog.

Mento offers a collection of posts that he previously published from 2005 to 2012 on Thieves in the Temple, a “political action weblog.” They cover a broad range of topics, including the Iraq War, the failings of the media, the 2008 housing crisis, and environmental protection. Each entry is just a single paragraph in length and focuses only on one issue, resulting in a litany of quick-witted reactions rather than lengthy disquisitions. The author unabashedly identifies himself as a purveyor of liberal values—both on practical and moral grounds—but he directs his criticisms at both sides of the aisle, as he’s more committed to a thoughtful liberalism than to any particular party. For example, there’s no shortage of scathing judgments of Barack Obama’s policies, both as a senator and as president. And although Mento generally avoids grand philosophical issues, he permeates the book with discussion of what the essences of liberalism and conservatism really are. Some of the most intellectually engaging discussions revolve around the definition of an authentically conservative creed; for example, he argues that a true conservative would embrace economic protectionism rather than internationally free markets: “And wouldn’t a real conservative think of a ‘global economy’ as a near-synonym for ‘foreign entanglements?’ ” Mento writes with acerbic flair and has a talent for distilling complex issues into quickly digestible parts. Also, he combines the comic with the serious seamlessly—just about every post is studded with sarcastic irony. However, there are limitations that are inherent to the book’s format: one-paragraph discussions are rarely deep and have a tendency to devolve into platitudes. Further, because Mento’s discussions usually targeted news of the moment, much of the book feels dated. The signature virtue of a blog is its responsiveness to current events, so it seems odd to immortalize such ephemeral reflections in print.

Entertaining, sometimes-insightful political philippics, although they lack timeliness and depth.