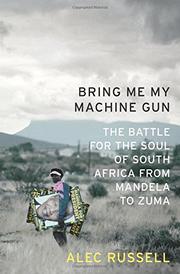 BRING ME MY MACHINE GUN

The author admits that he, like many other interested observers, was “seduced by the outward signs of change” when the serene reign of moral leader Nelson Mandela was followed by technocrat Thabo Mbeki in 1999. At this time, a black middle class seemed to be emerging. However, by 2008 Mbeki had lost touch with the people and was ousted by his party, the African National Congress (ANC), paving the way for the populist insurgency of the largely uneducated, scandal-ridden “Big Man” Jacob Zuma. (The book’s title is taken from Zuma’s “signature anthem.”) Having observed the charismatic Zuma in action, Russell compares him to “a revivalist preacher or the leader of a cult.” The author tracks the numerous political pitfalls since Mandela’s “sainthood,” covering much of the same territory as South African journalist Mark Gevisser’s upcoming biography of Thabo Mbeki, A Legacy of Liberation. Russell also considers some of the most pressing issues that the post-liberation country faces: the incendiary problem of race relations still plaguing whites and blacks, exacerbated by the huge disparity in wealth; internal rifts within the ANC, which had to adapt from a liberation movement to a modern political party; the culture of violence and failure of law enforcement; the urgent need for land-ownership reform; and the necessity of redressing Mbeki’s disastrous denial of the AIDS epidemic. Casting their shadow over South Africa are numerous other sub-Saharan liberation movements that have morphed into authoritarianism, corruption and ethnic strife, such as in Angola and Zimbabwe. Russell offers a sobering look at how South Africa must “buck [this] depressing trend.”

An important dispatch from a journalist in the trenches.