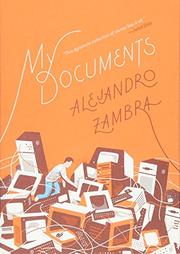 Eleven quirky tales from the Chilean novelist (Ways of Going Home, 2013, etc.), powered by people's fear of relationships and the strange ways we project our urge for connection onto others.

Twice in this collection a character clings to a computer for warmth, an act that symbolizes the alienation the inhabitants of Zambra’s world feel and his curious take on those feelings. “Memories of a Personal Computer" tracks the history of one machine from its purchase in 2000 to its banishment years later; in between, Zambra exposes just how much the machine draws together and separates the owner's family, wryly depicting it as quasi-human (“the computer’s conduct was, during this period, exemplary"). Similarly, “Family Life” follows a man who’s taken a catsitting gig after hitting the skids; searching for the cat, he begins a flirtation with a local woman, prompting him to extend his bumbling playacting at domesticity. Zambra is particularly interested in the childhood roots of his characters' harmless but unusual behavior: In the title story, an altar boy is guilt-stricken after caressing another boy; in “Camilo,” the arrival of the godson of the narrator’s father throws off the household’s rhythms; and the school kids in “National Institute,” who are terrified of their domineering teachers, are at first so dehumanized that the narrator refers to his classmates as numbers. Though the subjects throughout are serious, Zambra has a light touch; former dictator Augusto Pinochet is referred to numerous times but more as a generational marker than as political shading. At times, Zambra’s cleverness gets the better of him, as in “I Smoked Very Well,” an offbeat quitter’s diary, but the concluding “Artist’s Rendition,” about a crime writer rushing to finish a story, artfully shows the transformation of difficult fact into resonant art.