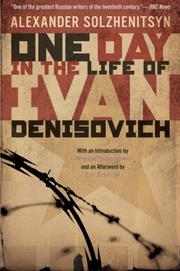 ONE DAY IN THE LIFE OF IVAN DENISOVICH

While a few weeks ago it seemed as if Praeger would have a two month lead over Dutton in their presentation of this Soviet best seller, both the "authorized" edition (Dutton's) and the "unauthorized" (Praeger's) will appear almost simultaneously. There has been considerable advance attention on what appears to be as much of a publishing cause celebre here as the original appearance of the book in Russia. Without entering into the scrimmage, or dismissing it as a plague on both your houses, we will limit ourselves to a few facts. Royalties from the "unauthorized" edition will go to the International Rescue Committee; Dutton with their contracted edition is adhering to copyright conventions. The Praeger edition has two translators and one of them is the translator of Doctor Zhivago Dutton's translator, Ralph Parker, has been stigmatized by Praeger as "an apologist for the Soviet regime". To the untutored eye, the Dutton translation seems a little more literary, the Praeger perhaps closer to the rather primitive style of the original. The book itself is an account of one day in the three thousand six hundred and fifty three days of the sentence to be served by a carpenter, Ivan Denisovich Shukhov. (Solzhenitsyn was a political prisoner.) From the unrelenting cold without, to the conditions within, from the bathhouse to the latrine to the cells where survival for more than two weeks is impossible, this records the hopeless facts of existence as faced by thousands who went on "living like this, with your eyes on the ground". The Dutton edition has an excellent introduction providing an orientation on the political background to its appearance in Russia by Marvin Kalb. All involved in its publication (translators, introducers, etc.) claim for it great "artistic" values which we cannot share, although there is no question of its importance as a political and human document and as significant and tangible evidence of the de-Stalinization program.