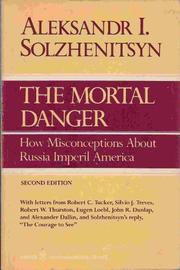 How Misconceptions About Russia Imperil America.

In his polemic, Nobel laureate Solzhenitsyn is becoming more fanatical with each foray down from his Vermont mountain. His single-mindedness is here set on the distinction between the organism that is Russia and the disease which affects it, Soviet Communism. Reprinted from the Spring 1980 issue of Foreign Affairs, this short diatribe is directed at scholars, correspondents, and even Soviet émigrés who conspire, albeit unwittingly, in a specious blurring of this distinction. Solzhenitsyn's attacks on the likes of Harvard's Richard Pipes for creating the myth of the Russian character—whether understood as docile or aggressive—are well taken; but Solzhenitsyn is in the myth business himself. Ignoring the other peoples of the USSR, Solzhenitsyn's dream is of a purified Russia left alone with its ancient orthodoxy—purged, of course, of the atheistic communist heresy. Responding to his critics, Solzhenitsyn denies being a reactionary or a mystic, or even anti-Semitic (he simply believes in the return of Russian Jews—a misnomer, in his view—to their homeland, Israel). The reactionary side is there, though, in his idealization of pre-Bolshevik Russia, as yet untainted by the West's materialism, where toleration and Christian principles supposedly reigned supreme, an idealization that carefully ignores blemishes like orthodox-inspired pogroms or the cruel illiteracy of the vast peasantry and their domination by the Church. Solzhenitsyn's organic nationalism lays behind his dogmatic rhetoric, however much obscured.