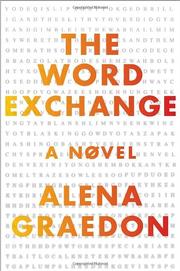 Language becomes a virus in this terrifying vision of the print-empty, Web-reliant culture of the 22nd century.

Students of linguistics may run screaming from this dystopian nightmare by Brooklyn-based debut novelist Graedon, but diligent fans of Neal Stephenson or Max Barry will be richly rewarded by a complex thriller. In fact, the novel is as much about lexicography, communication and philosophy as it is about secret societies, conspiracies and dangerous technologies. Our heroine is Anana Johnson, who works closely with her father, Doug, at the antiquated North American Dictionary of the English Language. The dictionary is an artifact in a near future where most of the populace uses “Memes”—implantable devices that feed massive amounts of data to users in real time but also monitor their environments to suggest behaviors, purchases and ideas. The devices, marketed by technology behemoth Synchronic, have become so pervasive that the company has enough clout to create and sell language itself to linguistically bereft users in their online Word Exchange. If that sounds creepy, it is, and it gets worse. One evening, Doug gives Ana two bottles of pills and a code word, “Alice,” to use if danger should enter their loquacious lives. When Doug disappears, Ana and her comrade Bart must navigate the increasingly treacherous world behind the clean lines of Synchronic's marketing schemes, complete with chases through underground mazes and encounters with the subversive "Diachronic Society," which leads the resistance against the Meme vogue. The danger explodes when the world is engulfed by “word flu,” causing widespread, virulent aphasia. “As more and more of our interactions are mediated by machines—as all consciousness and communications are streamed through Crowns, Ear Beads, screens and whatever Synchronic has planned next, for its newest Meme—there’s no telling what will happen, not only to language but in some sense to civilization,” warns the resistance. “The end of words would mean the end of memory and thought. In other words, our past and future.”

A wildly ambitious, darkly intellectual and inventive thriller about the intersection of language, technology and meaning.