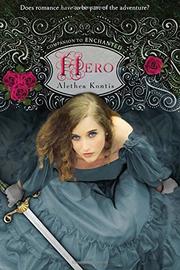 The cover is terribly wrong—again—but Kontis’ return to the Woodcutter family is still mightily entertaining.

This story focuses on Saturday Woodcutter, whose sister Sunday from Enchanted (2012) is now queen. Saturday is a big, strong girl who has not figured out her magic, except that the ax she was given as an infant has turned into a sword that strengthens and heals. Tossing away a magic mirror endangers her whole family, especially her changeling brother, Trix, and she goes off to find and save him. She’s mistaken for her lost brother, Jack Woodcutter, by a blind witch whose eyes he stole and who imprisons Saturday. The witch also keeps captive a man named Peregrine, magicked by the witch’s daughter into taking her place. Peregrine does his best to keep busy and sane, while dressing as a woman and trying to both serve and outwit the witch. Peregrine and Saturday are a wonderful couple, as they spar, miss signals and exchange roles, aided by Betwixt, a chimera also held by the witch. There is hardly a fairy-tale or gender trope that Kontis doesn’t turn on its head, and readers don’t need to know about Hercules cleaning out the Augean Stables to find Saturday’s impossible task of cleaning the witch’s bird’s nest both hilarious and revolting.

Whether Kontis tells the tales of other Woodcutter children or not, readers will await her next with joyful anticipation.