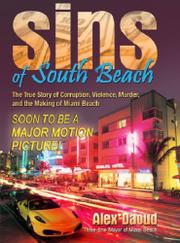 The True Story of Corruption, Violence, Murder, and the Making of Miami Beach

A young mayor is pivotal in the revival of boomtown Miami Beach in the 1980s, all the while indulging his large appetites for money, power and sex.

In this compelling, well-written tell-all novel detailing his own political rise and fall, three-time Mayor of Miami Beach Daoud delivers a steamy story that reads like a cross between Hollywood Babylon and All the King’s Men. Undefeated through 12 years of elections in Miami Beach, Daoud became the city’s first mayor to gain re-election in 20 years and then became the city’s first three-term mayor. His job was officially part-time and certainly small potatoes, as he barely earned a five-figure salary for 60-hour weeks. While overseeing the revitalization of South Beach, lawyer Daoud realized that he possessed a couple valuable commodities: his vote and his influence. He began to sell these assets to local bankers, developers and union bosses. As his first marriage began to dissolve when his wife moved to North Carolina to attend dental school, Daoud discovered that money and power could attract women. Though an adulterer during two marriages, Daoud pushed himself to provide financial support for his mother and his young son. As federal agents closed in on him, he learned that most of his “friends” were only using him, and he eventually faced a 41-count indictment by himself, not wanting to snitch on his co-conspirators. Daoud fought the government in court, where he was ably defended by his attorney, Roy Black. When Daoud could no longer afford the best attorney available, his case began to crumble. Eventually he was found guilty on a handful of counts and sentenced to 63 months in a federal prison, of which he served 18 in various locations due to death threats against him. This compelling story may remind the reader of a Greek tragedy, as the protagonist’s own vices lead to his demise.