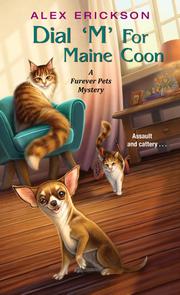 Cats may have nine lives, but an animal rescuer has only one, and that one’s hanging by a thread.

Arriving at the home of Joe Hitchcock, who’s adopting Maine coon cat Sheamus, Liz Denton finds that he’s not only been murdered, but has been revealed as someone else. The police inform her that he’s really Joseph Danvers, still a person of interest in the disappearance of his wife, Christine, 30 years ago. Although no body was ever found, racist bigot Harry Davis claimed to have seen Danvers with a body and a shovel. Liz is disturbed that her customary vetting of prospective adopters didn’t turn up the truth about Joe and nervous when someone in a brown sedan follows her home. She consults with her daughter, Amelia, who’s interning for Chester Chudzinski, a private eye who’d been trying to prove Joseph Danvers innocent of any crime before Joseph was driven from town by prejudice and finger-pointing. The case takes a major turn when Liz’s stalker turns out to be Joseph’s son, Erik Deavers, whose mother, Christine, changed her name when she skipped town already pregnant. Though she’d tried to find Joe after he changed his own name, she died without seeing him and always told Erik it was better if he didn’t know what had happened years before. On top of her fears about these investigations, Liz is frazzled when her nemesis, Courtney Shaw, another pet rescuer, dumps what she claims is a lost Chihuahua on her and stands by idly when the owner accuses Liz of stealing it. With her husband busy at his veterinary clinic and her son involved with the latest in a string of unsuitable girls, Liz works with Amelia to solve the case a killer doesn’t want solved.

Who can resist such charming pets and a mystery stuffed with so many suspects, even if it runs a mite too long?