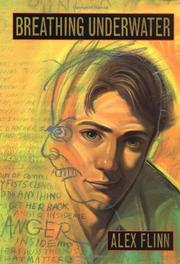 Nick Andreas—16, rich, smart, popular—seems to have a perfect life, and when beautiful, talented Caitlin becomes his girlfriend, it looks to outsiders as though it can’t get any better. After beating up Caitlin, however, Nick receives a restraining order to stay away from her and is sentenced to complete a family violence program, as well as to keep a journal that describes his relationship with her. First-novelist Flinn combines Nick’s present-day life—attempts to win back his former girlfriend, anger-management meetings, and struggles to maintain self-control—with diary entries that reveal his controlling and abusive relationship with Caitlin, his own verbal and physical abuse by his father, and low self-esteem. With such important subject matter, particularly for young males, and research by the author, there’s potential here; however, it fails to meet readers’ expectations. Characters, stereotypical at times, are not fully developed, and the language is often contrived. Nick’s anger appears out of nowhere when he begins to date Caitlin and subsides too quickly by the end. Although it shouldn’t be used for bibliotherapy, it offers a lot to think about, and many teens will probably overlook its major flaws because of the format and real-world content. (Fiction. YA)