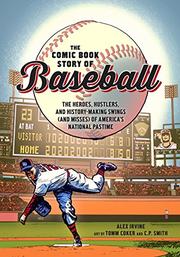 THE COMIC BOOK STORY OF BASEBALL

The Heroes, Hustlers, and History-making Swings (and Misses) of America's National Pastime

A visual history of the game, from playfully imagined early precursors (“Overrunneth not the bag, Prudence!”) to 21st-century feats and follies.

“Everything in baseball gets mythologized,” Irvine writes, and accordingly he dishes up scornful dismissals of Abner Doubleday, Babe Ruth’s “called shot,” and even the Cubbies’ “curse of the billy goat” in this overview. Still, he sometimes succumbs to the lure himself, as when he declares Joe DiMaggio’s 56-game hitting streak “in all likelihood, the most improbable feat in the history of organized sports.” His minute tallies of the comings and goings of leagues and teams and stadiums down the years make arid reading, but even indifferent fans will find his profiles of colorful figures (particularly the “misfits and weirdos”) and their pithy comments (Mantle, on Koufax: “How the f*ck are you supposed to hit that sh*t?”) entertaining. Moreover, his frank acknowledgement of the sport’s racist past as well as worthy if sometimes tone-deaf nods to players in and from Japan and Latin American countries, to women, to Native Americans (in a box headed “Hail to the Chief”), and to select stars of the Negro Leagues add at least some depth to the historical picture. Unfortunately, the story is not shaped into a coherent narrative but presented in fragmentary bits, with many digressions and glances ahead. Shoehorning the text boxes and speech balloons into cramped black-and-white panels only adds to the general disorder.