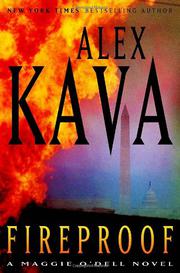 FBI profiler Maggie O’Dell (Hotwire, 2011, etc.) goes up against an arsonist and a murderer who may or may not be the same person.

Fires are all too common in the nation’s capital, but the latest blaze is worse than most. It’s obviously a case of accelerant-assisted arson. An anonymous phone call sends Detective Julia Racine of the Metro Police Department to a trash container outside the building, the final resting place of a Jane Doe whose face has been bashed beyond all recognition. And there’s no telling what connection, if any, the fire has to the homicide. Working the case with Detective R.J. Tully, her best friend’s lover, Maggie finds an unexpected sounding board in her half brother Patrick, who’s gone to work as a private firefighter for Braxton Protection. But she’s about to be dumped in hot water by hungry TV reporter Jeffery Cole, who’s so provoked by their brief standoff at the scene that he plans an extended on-air profile of her. As the firebug continues to roam free and Patrick begins to make tentative romantic overtures to Cole’s partner, photojournalist Samantha Ramirez, Maggie must survive a series of variously bruising encounters with her one-time lover Dr. Benjamin Platt, her unstable mother, Kathleen, ancient consulting psychiatrist Dr. James Kernan and homeless accountant Cornell Stamoran. None of them brings her any closer to the arsonist, even though most readers will be way ahead of her.

Kava combines the clichés of serial-arsonist fiction with Patricia Cornwell’s irritating habit of ending her heroine’s quests not with a bang, but a whimper. To be continued.