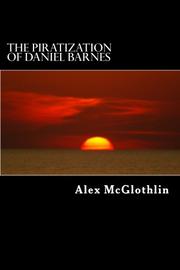 The Piratization of Daniel Barnes

In McGlothlin’s debut novel, a lovelorn journalist becomes ensnared in the lives of modern-day pirates in Somalia.

Daniel Barnes has arrived in Mombasa, Kenya, from Washington, D.C., hoping to enter neighboring Somalia. Although he has minimal experience as a journalist, he plans to get a story that will not only make his career, but also convince his childhood sweetheart, Bally, to choose him over her fiance. No official transport will enter the war-torn nation, so Daniel must secure passage by boat. He eventually hires Capt. Zakia, who takes the journalist on his yacht. When pirates overtake the vessel, Daniel is knocked out and later awakens in a “five-by-five cell made of a heinous amalgamation of chicken [wire] and barbed wire.” After about six weeks, he’s driven to the Somali hinterland by associates of Amir Sharif, a man who helps kidnap victims get home. Daniel receives three months of regular food and exercise, but then he’s suddenly shackled and brought to a slave auction. There, a pirate captain, Sayyid, bids $20,000 for the strong looking white man and soon tells him, “Your story of me will put my picture on cereal box like Kobe Bryant.” McGlothlin’s unpredictable debut is a superb portrait of the bombed-out region surrounding Mogadishu, where, as Sayyid says, “death...is a sunset. It bring darkness but happen everyday.” It’s also a classic adventure story, during which chaos transforms the seemingly average protagonist into a formidable hero. The characters—from Sayyid’s crew members to a manipulative sheikh to World Health Organization medic Caitlin—all play specific roles in creating the new Daniel. Readers will grit their teeth at the severe narrative turns, including animal fights in a Roman-style arena and Daniel’s increasingly savage behavior to stay alive (including ear-biting, shooting, and harpooning). There’s great moral heft in the situations in which Sayyid tries to retain his “Somali Robin Hood” status while his Sharia-following brother, Yousef, demands that they work for Allah. The answer to the question of whether Daniel is “the cure or the cancer” for the pirate crew is an epic one.