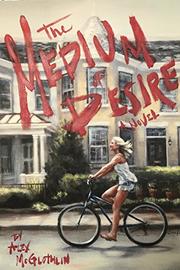 THE MEDIUM OF DESIRE

A love story set in Virginia and nestled at the intersection of art and everyday life.

Brett Bale is a popular, successful painter based in Richmond. His work is known both for its esoteric characterizations of human emotion (which one studio owner calls “wild, archetypal and primitive”) and elementary appeal (“So few lines. So little paint”). He works on commission, selling to B-list clients through his broker, Salina. Meanwhile, Olivia Martin lives in New York City and works for the notorious hedge fund McCann & Co. Her job is all-consuming, and she’s spent the past four years rotting away in a cubicle, hunched over Excel spreadsheets and dealing with her misogynist boss, Matthew Weiss. When she presents a new algorithm to the company’s executives, Matthew expectedly takes the credit. Finally pushed to her limit, Olivia quits—forgetting that she was forced to sign a noncompete agreement that prohibits her from working for another hedge fund for six months. At a loss, she moves back to Richmond to live with her parents while she figures things out. As a way to expand on his artist brand—and following Salina’s advice—Brett decides to take on an apprentice, who turns out to be Olivia. Studying with the acclaimed Brett reawakens her love for art that she thought she’d lost. In the process, Brett and Olivia fall in love, though not without a long period of hovering, innocent flirtation and momentous internal dialogue. McGlothlin’s (The Piratization of Daniel Barnes, 2018) second novel is a careful study of the effect of a hermetic artistic practice as well as the impact of burning out at an overwhelmingly demanding job. Although some of the dialogue comes off as highfalutin, with its grandiose ruminations on art (“form is everything….The building we stand in is form, originally outlined in an architect’s blueprints….All for a specific purpose, to attain a desired effect”). However, the author creates highly believable characters amid the sobering realism. He compellingly depicts Brett and Olivia’s relationship, constantly questioning the role of art in everyday life, the function of the artist within society, and the place that love occupies in this process.