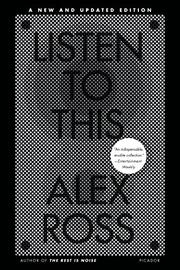 A vibrant new collection from New Yorker music critic Ross (The Rest is Noise: Listening to the Twentieth Century, 2007).

The author brings together the best of his writings, mostly from the New Yorker, with revisions, expansions and a few recently drafted pieces. As such, there is not much new for those who have followed Ross over the last 15 years, but for those who have not explored his work, this is a fine place to start. This book is the ideal introduction not only to the author’s criticism, but to what it means to be a great music critic. For Ross, that means writing with a personal mission that approaches music, as he puts it, “not as a self-sufficient sphere, but as a way of knowing the world.” Indeed, the author is at his best when he artfully pulls down the artificial yet powerful boundaries that keep the classical tradition apart as ponderous and exclusionary in favor of a worldview more embracing of personal musical responses that remain indifferent to genre and social class. The results are mostly successful. The promising second chapter, which traces a four-note musical figure over the course of Western music history, quickly devolves into pedantry, an effect that supports rather than undermines the premise that classical music and its more popular variants can resist the stereotypes associated with buttoned-up white men. Likewise, some of Ross’s arguments rely on the very same false constructs—the decline of classical music, the rising musical literacy—that he rails against elsewhere. Yet the author is delightfully convincing throughout most of the book. What is truly remarkable has less to do with the variety and breadth of his individual subjects—be it Bach, Brahms or Björk—and more to do with his gift to divine meaning within the aggregate of the musical styles, traditions and personalities to which he exposes readers.

A celebration of what it means to be alive in a world of great music.