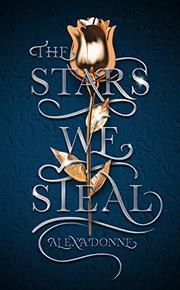 THE STARS WE STEAL

For the second time in her life, Leo must choose between her family and true love.

Nineteen-year-old Princess Leonie Kolburg’s royal family is bankrupt. In order to salvage the fortune they accrued before humans fled the frozen Earth 170 years ago, Leonie’s father is forcing her to participate in the Valg Season, an elaborate set of matchmaking events held to facilitate the marriages of rich and royal teens. Leo grudgingly joins in even though she has other ideas: She’s invented a water filtration system that, if patented, could provide a steady income—that is if Leo’s calculating Aunt Freja, the Captain of the ship hosting the festivities, stops blocking her at every turn. Just as Leo is about to give up hope, her long-lost love, Elliot, suddenly appears onboard three years after Leo’s family forced her to break off their engagement. Donne (Brightly Burning, 2018) returns to space, this time examining the fascinatingly twisted world of the rich and famous. Leo and her peers are nuanced, deeply felt, and diverse in terms of sexuality but not race, which may be a function of the realities of wealth and power. The plot is fast paced although somewhat uneven: Most of the action resolves in the last quarter of the book, which makes the resolutions to drawn-out conflicts feel rushed.

A thrilling romance that could use more even pacing.