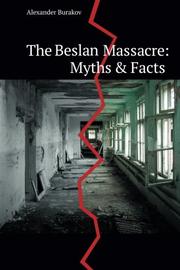 An investigative review of the notorious Beslan massacre that thoroughly pieces together a version of what really happened, debunking long-standing mythology along the way.

Burakov, in his journalistic debut, wanted to present the whole truth, following the evidence wherever it led. The result is a fearless examination that anatomizes every available shred of evidence and relentlessly interrogates every rumor that previously masqueraded as fact. In September 2004, armed assailants stormed a school in Beslan, North Ossetia. They planted explosives and took hundreds of hostages, many of them students. Burakov scrutinizes the nature of the terrorist organization that perpetrated the attack, then compares the roles of the local police versus the Federal Security Service of Russia and tries to discern the true cause of the catastrophic explosions that took place in the gymnasium. He grimly reveals the full extent of the casualties, which mortify the official number. Helpfully, the book provides ample background information, detailing the region’s troubled history from the 18th century through two Chechen wars and up to the present. The reasons for the current welter of misinformation regarding the Beslan massacre turn out to be as morbidly fascinating as the massacre itself: a grotesque amalgam of Russian governmental spin, contradictory witness accounts, and the bias of the Western press. In the aftermath of the debacle, rhetoric about the massacre became a craven political tool. “With the Russian government maintaining silence, the informational space related to coverage of Beslan naturally came under the control of sources in opposition to the government and to the President. The massive smear campaign resulted in unofficial alliances of parties so dissimilar in nature that it would almost be unimaginable for them to work together in any other situation.” And, he says, the battle for truth isn’t over. “Remnants of the fight have continued for years after the crisis and have shifted to social media causing the splitting of the Internet world into pro- and anti-government camps.” What emerges from Burakov’s analysis is much more than a vivid picture of one terrible event; it’s also a look at an entire region in the throes of dysfunction.

A remarkable testament to the power of investigative journalism in the face of lies and careless rumor.