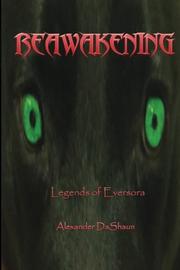 From the Legends Of Eversora series, volume 1

In this debut fantasy, a shape-shifting sorcerer attempts to develop the skills necessary to thwart an ancient prophecy.

In the realm of Eversora, on the island of Lyrea, 15-year-old Darius is the son of a blacksmith. The boy’s best friends are books and knowledge, since the other teens shun him for not having a mother. His father, Keron, is the blacksmith for Baron Jesha, who oversees the mining town of Sinac. When Darius wonders what happened to his mother, Keron decides he’s old enough to know the truth. First Darius visits the library in Baron Jesha’s castle. On the way, he encounters a young girl with hypnotically green eyes. Further strangeness occurs inside the castle when Darius accidentally locates a chamber protected by magic. Inside is a book that won’t open. He brings the volume home, and his father explains that only nueri—shape-changing wolves—or people with majik in their blood, could have entered the chamber. Keron then tells him that the foul snake people, the Ananta, once enslaved a tribe of nueri called the Szahn. Darius’ mother, Virana, belonged to the Szahn. She left Sinac with the tribe, and the book is her journal. Later, Keron acquires a troublesome wolf pup that’s been caught nearby. The pup bonds with him and says that she is Dyla, Darius’ sister. That Keron possesses no knowledge of having had a second child with Virana is the grand intrigue in DaShaun’s grisly, toothsome novel. He places Darius at the convergence of several fantasy tropes, including Keron’s sorcerous bloodline and the prophecy stating that a child born of man (and another born of the soul) will destroy the Szahn. DaShaun sets a large stage meticulously, but once the action starts, the plot delivers thrills with monstrous gusto. The transformation sequences are visceral, as when one character “could feel ligaments and tendons snapping away from their connections, twisting inside his skin.” Further components like elemental lineages and a set of triple moons make for a magically layered narrative.

The ultimate crossroads for fans of werewolves and medieval sorcery.