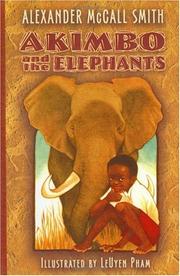 AKIMBO AND THE ELEPHANTS

Well before Smith became known for his deft, book club pleasing Number 1 Ladies’ Detective Agency series, he penned sweet stories of Akimbo, the intrepid, nature-loving African boy. From his father, Akimbo learns to love animals and passes up no opportunity to protect them from poachers and sometimes from each other. In the first adventure, Akimbo learns about poachers who kill elephants for their tusks. In the tradition of the Hardy Boys, he takes matters into his own hands, breaks a few family rules and hunts the poachers himself. In the second story (Akimbo and the Lions, ISBN: 1-58234-686-0), Akimbo’s father is called upon to save livestock from encroaching lions, and a cub is abandoned in the process. While readers will want to know which country Akimbo calls home and will question the stereotyped sex roles, they will cheer for the good-hearted boy as he bravely faces each danger in his quest to protect his beloved animals. (Fiction. 7-11)