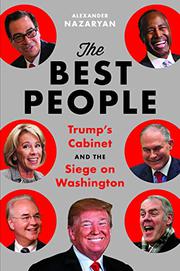 Trump's Cabinet and the Siege on Washington

A disheartening portrait of the alternately incompetent and corrupt Cabinet of the current administration.

In his scathing critique, Yahoo News national affairs correspondent Nazaryan (co-author: Children of the Dream: Why School Integration Works, 2019, etc.) shows clearly how Donald Trump, with his “intentionally nonlinear presidency,” established a Cabinet consisting of crucially inexperienced individuals in public service, each remarkably unqualified to assume key pivotal decision-making roles in politics. In an assembly both “overwhelmingly male, and overwhelmingly old,” each member was lauded for their elite status and financial worth and, to the author, “wealth that was tacky and vulgar, wealth desperate for recognition, wealth that could only have been an insult to the average citizens whose tribune Trump vowed to be in Washington.” Nazaryan provides glaring examples of the rampant conflicts of interests and ethical red flags by meticulously detailing the head-scratching nomination hearings of Betsy DeVos, a fundamentalist conservative Christian with a skewed view of an education official’s priorities; Steve Mnuchin, secretary of the Treasury, who filed false financial asset disclosures upon his appointment; Rick Perry, the Department of Energy secretary who was blatantly unsure of what his position actually governed; wealthy investor-cum–commerce secretary Wilbur Ross; and Department of Housing and Urban Development nominee Ben Carson, who lacked any governmental or federal agency experience whatsoever. While this type of bureaucratic runaway train is not news to political watchdogs, the author manages to put a fresh spin on a dire situation with snarky humor and wince-inducing facts, though his intense contempt at times borders on unnecessary mudslinging. While he also identifies countless other impurities infiltrating the political stream—Priebus, Pruitt, Spicer, Bannon et al.—thankfully, he balances these out by documenting how imprudence and circumstance caught up to the pack and an incremental exodus ensued. Many others surprisingly remain in power, and Nazaryan is pleased to call out the remaining political “backbenchers of public and private life” whose tenures continue to crumble beneath the weight of unmet expectations.