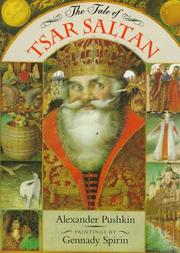 THE TALE OF TSAR SALTAN

A tale by Pushkin, based—according to the copyright page—on a translation by Pauline Hejl and adapted for the picture-book form. A trio of evil women—two sisters and the tsar's cousin—vow to destroy the young woman whom the tsar chooses to marry. Plotting against her, they have her and her infant son sealed inside a barrel and thrown into the sea. An enchanted swan effects a magical destiny for them, and the tsar, his wife, and their son are eventually reunited. The convoluted tale describes three journeys back and forth, the length and details of which lessen the impact of the matter-of-fact telling. The text becomes particularly confusing when the son of the tsar's wife marries a ``tsar's daughter,'' without offering readers a clue as to how the word tsar is used. The story is little more than a beam on which to hang the artwork: delicately executed, intricate paintings of scenery and costume, animals and magical events, in which Spirin shows Russian culture in all its splendor. (Picture book/folklore. 5-8)