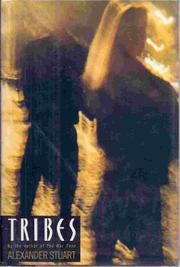  Set in the contemporary London filmmaking world: a study of male aggression and violence--sporadically vivid but ultimately heavy-handed and simplistic. Stuart's hero is ambitious movie-producer Nick Burns, 29, handsome but slightly remote and cool. While finishing up work on a flashy thriller, Nick begins an affair with young publicist Jemima--who's just dumped her unfaithful husband and dotes on her three-year-old daughter. Nick finds himself more seriously, tenderly enamored than ever before, yet also given to violent fantasies: of rape, pain, abuse. Meanwhile, he manages, with much effort, to get the film rights to a hit play (called Tribes) about violence between rival armies of hooligan soccer fans--only to see the whole film project taken over by a Big-Name, egotistical, slightly mad American director. (``This isn't partnership, it's rape!'') And, in yet another unsubtle parallel development, Nick hires an actual soccer hooligan--a racist thug known as ``the Neck''--as his driver. (Presumably, the closeness of ``Nick'' and ``Neck'' is meant to underline the fact that both men are seething, in different styles, with violence.) The predictable upshot? Injuries at a soccer match; attempted rape; and an apocalyptic finale during the filming of a crowd scene--which provides Nick with a bone-crunching catharsis that allows ``him to recognize the truth of his emotions for the first time.'' Stuart (The War Zone, 1989), a not untalented writer, offers some arresting glimpses of seamy South London and a few convincingly nasty movie-biz sequences--along with lots of graphic sex and brutal talk. But the treatment of the violence theme here- -the power-games, the links between aggression and sexual insecurity, the hooligan in us all, etc.--is belabored and even, at times, sophomoric.