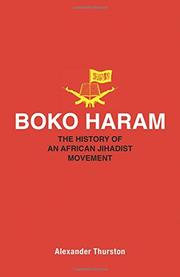 The History of an African Jihadist Movement

A diagnostic study of the ultraconservative “mobile jihadist gang” from Nigeria that has taken a violent toll on government and civilians alike.

In 2014, the kidnapping of 276 schoolgirls from the Nigerian town of Chibok brought worldwide attention to this terrorist group whose name derives in Hausa-Arabic from “Western-style education” (boko) and “forbidden” (haram). Thurston (Salafism in Nigeria: Islam, Preaching, and Politics, 2016) systematically examines the movement’s origins as a religious study group in 2002 in the Nigerian city of Maiduguri, led by the charismatic preacher Muhammad Yusuf, through subsequent chronological phases: a decisive turn to violence by 2009, uprising (and death of Yusuf) followed by government suppression, and re-emergence in 2010 as a terrorist group linked to al-Qaida. In the first chapter, “The Lifeworld of Muhammad Yusuf,” the author provides a solid overview of the fluctuating society in northeastern Nigeria from the 1970s, when Yusuf was born and the north of the country lagged in development compared to the south, through the 1990s, when disruptive urbanization and globalization pushed people into migration, poverty, and illiteracy. Western schools, a remnant of British colonialism—Nigeria became independent in 1960—were seen as highly suspect places. As Thurston writes, “Western-educated politicians and technocrats have presided over a system that has stolen much of Nigeria’s wealth, leaving much of the population poor.” With Christian-Muslim tensions rising, ultraconservative Salafi teachings became more popular. The author delves deeply into what Yusuf was actually teaching: a core doctrine of religious exclusivism that clearly demonized anyone thinking otherwise, with a focus on the Quranic slogan, “Chaos is worse than killing.” Thurston also weighs the mostly ineffectual government responses and urges a “long-term, fine-grained approach to understanding the Boko Haram crisis.” This book is a good starting point.

Though the author sets aside “Boko Haram’s treatment of women” due to “reasons of space,” he offers a highly useful, timely, illuminating work about a little-understood terrorist group.