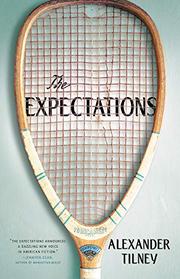 Prep school isn’t what it used to be, as Ben Weeks discovers during his first year at the elite St. James School.

Debut author Tilney deftly limns the unchanging eponymous expectations: that students will graduate to the Ivy League and real-world leadership; that while at St. James they will uphold such dubious traditions as ferocious competitiveness in sports and brutal hazing of new students. But Tilney also nails the changing social climate of the mid-1990s, when Ben arrives more than 125 years after the first Weeks attended St. James. There are female students now as well as students from such previously unheard-of places as Dubai, like Ben’s roommate, Ahmed. Ben eagerly looks forward to following in the footsteps of just-graduated older brother Teddy, legendary for his rule-breaking panache, and he’s also excited to join the school’s equally legendary squash team. So he’s mortified by Ahmed, whose clothes and accessories are too obviously expensive for the school’s ostentatiously modest ethos and who calmly walks out of the hazing ceremony, incurring the malice of a clique of upperclassmen determined to “hold the line” for “our kind.” They are the cool kids Ben is desperate to be accepted by, his insecurity exacerbated by the knowledge that his father is in financial trouble and hasn’t paid his tuition. He engages in some petty cruelty and stupid escapades, but he also feels grudging admiration for Ahmed’s ability to simply be himself. Tilney’s inexperience occasionally shows as he cogently traces Ben’s trajectory toward his own version of that self-assurance. The third-person narrative is mostly from Ben’s perspective but from time to time pulls back jarringly to tell us what another character is thinking or to offer an Olympian overview of the shifting social landscape. Despite such infelicities, the novel paints a compassionate portrait of a confused young man groping for maturity and comes to a trenchant conclusion about St. James: “The school’s ethics were a scrim over its animal need to survive. Just manners over its unforgiving appetite.”