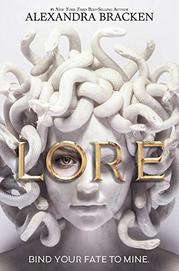 To get revenge for her family’s murder seven years ago, Lore must reenter a deadly contest from her past.

Leaving the conflict of gods and their hunters behind, Lore thought she had forged a new life. However, the Agon has begun again and brought with it an injured Athena, who promises her revenge on the one who ordered her family killed—in exchange for an oath binding their fates together. Lore must hunt down the god once known as Aristos Kadmou, with the catch that she only has eight days. Also, failure means the deaths of both Lore and Athena. Depictions of graphic violence and discussions of sexual assault are frequent, creating a tale as violent and unforgiving as its source material, albeit narrated through a feminist lens. Much like the heroes of ancient epics, Lore is a morally ambiguous but ultimately likable character, struggling to eliminate the monsters of her world while not falling into the brutality of her youth. She is contrasted with the idealistic Castor, her childhood friend and love interest, with whom she has plenty of chemistry. Bracken builds a rich world around a skeleton of ancient Greek mythology that is perfect to read on a dull weekend and sure to delight readers. Most main characters are cued as White; there are two men of color, both gay.