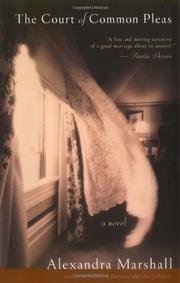 THE COURT OF COMMON PLEAS

As in her previous work (Something Borrowed, 1997, etc.), the author emphasizes character more than plot; the most hectic thing that actually happens to Audrey Brennan, a 49-year-old Cleveland nurse, occurs in the first chapter when she’s accepted into medical school—a milestone that provokes nothing but resentment from her family. Her mother blames Audrey’s audacity on ’60s feminism, while her two daughters—one a college student, the other a high-school junior—scoff at her decision as a “midlife crisis.” Worst of all, Audrey’s husband Gregory, 14 years her elder and ready to retire from a long, distinguished career as a judge, interprets Audrey’s surprise announcement as the revelation of a deliberate deceit. With his wife just verging on middle age, Gregory is ready to leave it; while he’s “already seen everything, some of it twice,” she is yearning for more experience. Added to the fray is Gregory’s crippling grief over the death of his protégé, Judge Robert Wallace, and his longing to be a father figure to Wallace’s young sons. One of the story’s more interesting themes is the legacy of feminism: Gregory came of age before it, Audrey during it (she was at Kent State in 1970), and for the first time in their long marriage this discrepancy begins to affect the relationship. Marshall, a keen observer of generational difference, creates ample sympathy for her people and their small concerns. The Court of Common Pleas will likely appeal to readers with lives similar to Audrey’s and Gregory’s, but for everyone else the effects are rather too subtle: even with such well-drawn characters inhabiting it, the plot remains thin.