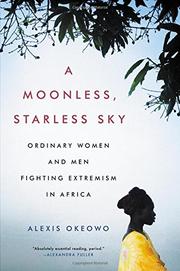 Examining conflicts in four African countries through the eyes of those experiencing and trying to fight them.

In this remarkable debut, New Yorker staff writer Okeowo, whose Nigerian parents moved to the United States, where she was born, explores significant conflicts in four African countries through the stories of individuals who have been victims of, but have also worked to combat, various forms of extremism. She delves into the lives of a couple who were victims of Joseph Kony’s Lord’s Resistance Army in Uganda. She tells of a young woman kidnapped by Boko Haram who managed to escape and of a man who joined in a vigilante organization confronting that terrorist group directly. She pursues the story of a man fighting against pernicious (and putatively illegal) slavery in Mauritania. She shows the struggle for young women in Somalia just to do something as seemingly innocent as play basketball. The author focuses her unflinching gaze on only a handful of people in each case study, which allows her a level of depth and nuance that a wider cast of characters would render impossible. Each of her tales, based on five years of on-the-ground reporting, gets two chapters: one in Part 1, “The Beginning,” and the other in Part 2, “The Aftermath.” These latter chapters, however, do not necessarily reach a conclusion; rather, they reveal a middle in which anything, including tragedy, could surely still happen. Throughout, Okeowo writes with beauty and grace, and her subjects are compelling. Refreshingly, she does not give in to easy answers. In the cases where the extremists are radical Islamists, she makes it clear that oftentimes the victims of their radicalism are devout Muslims, that Christian leaders and politicians are often equally culpable in local problems, and that complexity—not simplistic good-guy/bad-guy narratives—is a dominant theme throughout the region.

Cleareyed, lyrical, observant, and compassionate—reportage at its finest.