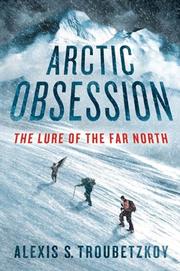 The Lure of the Far North

A boisterous survey of those answering the Siren call of the North Pole.

Troubetzkoy (A Brief History of the Crimean War, 2006, etc.) proceeds roughly chronologically as he follows dozens of explorers making their way to the Arctic in search of fame, fortune, discovery, adventure or territory. He starts with the Greek Pytheas, who claimed to have gazed upon Ultima Thule in 325 BCE, though the only account burned with the Library of Alexandria. The author tenders much cultural, historical, political and geographical detail, but not at the expense of drama, romance and manliness. Of the Vikings: “Drink, women, and song were embraced with the same fervor as war, pillage, and slaughter.” Of Dutch navigator William Barents: “One wonders at the mould from which these early Arctic intrepids were formed—exceptional people they were.” Then there was Norwegian explorer Fridtjof Nansen sleeping off the Arctic night: “We carried this art to a high pitch of perfection…sometimes as much as 20 hours’ sleep in 24.” Troubetzkoy makes excellent use of diaries and notebooks to convey period flavor and a sense of immediacy, as well as to showcase some dazzling writing, of which George Kennan’s description of the aurora borealis is a real gem. But the author wisely lets the extraordinary adventures speak for themselves, ushering along Sebastian Cabot seeking a northeast trade route to Cathay and Martin Frobisher looking to the northwest. There are the great tragedies of Henry Hudson, John Franklin, Jens Munk and a worshipful company of others, as well as the endless, ruinous attempts to discover a Northwest Passage. Troubetzkoy also intelligently discusses the effects of global warming on the fauna and flora, as well as modernization on the indigenous peoples. Bickering over mineral and oil rights is now standard fare at international conferences.

Colorful enthusiasm draped over a thorough treatment of Arctic exploration.