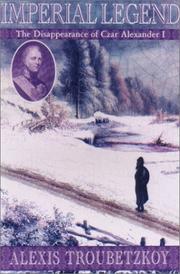 The Mysterious Disappearance of Tsar Alexander I

Move over, Anastasia: there’s a new alive-after-death Romanov in town, and therein hangs a lively tale.

Troubetzkoy, himself descended from Russian royals, turns up a mystery nearly two centuries old: the putative death at age 48 of Tsar Alexander I, celebrated for having marched his army in the streets of Paris after having helped defeat Napoleon. Everything about the death is suspicious, at least in Troubetzkoy’s eyes. Alexander died in a remote Siberian outpost far from competent doctors and medical examiners. Renowned for his strength, vigor, and various appetites, he had been in apparently splendid health and spirits on leaving the capital not long before. Moreover, the body that was represented as his bore signs of the lash, something no tsar could have been subjected to. Not long after Alexander’s death, a preacher turned up in Siberia who comported himself with military bearing and seemed to resemble the tsar in many ways; this Feodor Kuzmich, though a mendicant starets (holy man), once supposedly received a shipment of two hundred pairs of white silk stockings from Paris—and Alexander was known to have suffered from recurring athlete’s foot. On such evidence, none other than Leo Tolstoy was convinced that Alexander was Kuzmich, and Troubetzkoy capably defends the same view. Why the subterfuge, the faked death to escape from the burdens of the crown? Well, Troubetzkoy suggests, Alexander could have been suffering from a guilty conscience for participating, knowingly or not, in the murder of his father, Tsar Paul, who had been courting Napoleon and who, in the words of Alexander’s brother Constantine, had “declared war on common sense.” From regicide/parricide to supreme ruler and holy man: an odd career path, perhaps, but one that nicely sustains Troubetzkoy’s tale.

A decidedly minor contribution to history, but an entertaining read all the same.