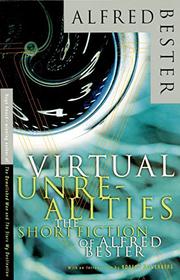 The Short Fiction of Alfred Bester

A major retrospective, comprising 15 tales from 194179 (mostly from the '50s and '60s), together with two previously unpublished pieces, though readers should note that the word ``selected'' has been omitted from the subtitle. Bester's (191387) reputation derives from two brilliant and influential novels, The Demolished Man (1953), the first Hugo Awardwinner for Best Novel, and The Stars My Destination (1957), plus a handful of classic stories. Among the latter here: ``Fondly Fahrenheit,'' a black farce about an android that turns homicidal when the temperature exceeds 90 degrees Fahrenheit; ``The Men Who Murdered Mohammed,'' in which Bester invented quantum time, a notion recently taken up by John Kessel in Corrupting Dr. Nice; ``The Pi Man,'' a chilling masterpiece whose protagonist is compelled to respond to changes in surrounding patterns that only he can perceive, later expanded into a wretched novel; the last man in the world, ``Adam and No Eve''; and ``Will You Wait?,'' a witty deal with the devil. Others, like ``Disappearing Act,'' ``Star Light, Star Bright,'' and ``Time is the Traitor,'' are more style than substance. But then Bester was always a consummate showman. Noteworthy for his passionate delivery, pyrotechnic prose, and dazzling ideas, Bester wrote cyberpunk 30 years before William Gibson. But when reality finally caught up, he fizzled out.