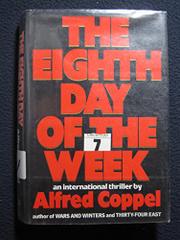 THE EIGHTH DAY OF THE WEEK

An underwhelming tale of nukes, coups, and spies by thriller veteran Coppel (Wars and Winters, 1993, etc.). Soyuz, a nationalist group seeking to reunite the historic Russian empire, infiltrates Russian government and military offices, including the command of the submarine Pravda. To provide a diversion during Soyuz's planned Moscow coup of the following year, the Pravda crew plants a device in the waters of northern Canada that will emit an electronic pulse and destroy US communication systems. Participating crew members are killed to ensure silence, but one scientist and one witness survive. Marine biologist Arkady Karmann flees the sinking Pravda off the Cuban coast, climbs out of the shark-infested waters onto a Honduran fishing boat with all but one hand, and begins a nearly year-long trek through Central America. The witness, left-wing activist Anna Neville, is fired at by the Pravda as she shoots nature photography from an airplane, but she later assumes that she was hit by an American submarine. In November of the following year, traditional, craggy Marine John Morgan is assigned to keep her from making accusations against the US. Despite their ideological differences, they ignite sexually, and Morgan becomes her bodyguard when she is marked for assassination by Marina Suslova, a Soyuz agent who seduces a male reporter and a female National Security Advisor assistant. The device ticks away under the Arctic ice and, true to Soviet inefficiency, becomes flooded and is rendered useless, but its plutonium reactor leaks. We should feel the tension of a countdown as the Americans and Canadians search for and dismantle the reactor, but Coppel cannot sustain it. Likewise, the narrative lacks the violence, action, and high technology that might excuse its vapid characters. It's enough to make you nostalgic for the Cold War.