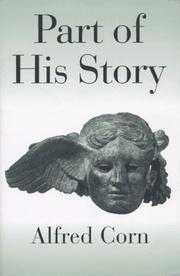 PART OF HIS STORY

An elegy to love lost and found in which poet Corn (Incarnation: Contemporary Writers on the New Testament, 1990) tests the waters of fiction for the first time. Avery Walsh, like all expatriates, is on the lam. A successful New York playwright, Avery is in Britain just now, taking his time over a biography he's been commissioned to write of the 18th- century London playwright Colley Cibber. Not anyone's idea of a workaholic, Avery manages to keep his heart in his work because it's dangerous to do otherwise: His lover Joshua has recently died of AIDS, and there's little joy in thinking of their lives together, though that is what he mostly does. ``Certainly,'' he asserts, ``I don't plan to come off as broken down with bereavement and sorrow (but I am, I am!).'' So he plods through his days, making notes and checking references at the British Museum and dealing with a few select literary friends in Hampstead or Spitalfields to keep up on the local gossip and the word from home. Then he meets Maeve Findlater, a leftist activist from Ireland, while she is passing out anti-apartheid leaflets on the street. She introduces him to her brother Derek, a reformed junkie on the dole. Avery is quickly drawn into a kind of emotional alliance with the two, a bond of desperation mixed with anger that awakens many of the feelings he's tried to suppress—especially when he and Derek find themselves falling in love. The fear of loss that Avery carries within him, though, suddenly becomes cruelly literal when Maeve and Derek become embroiled in violence during a mysterious trip to Ireland. In the end, Avery has to return to the life that he's left behind and discovers that he can, in fact, go home again. A work so beautifully constructed that one wants to overlook its rambling narrative, hackneyed plot, and two-dimensional people. Impressive in parts, but finally unpersuasive.