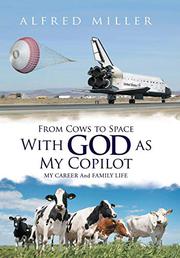 FROM COWS TO SPACE WITH GOD AS MY COPILOT

In this debut, Miller recounts his life on a farm just after the Great Depression and his later work on space shuttles.

The author describes himself as a “redheaded, freckle-faced, bashful, shy stuttering kid” who grew up in Wasco, California, with parents who had emigrated from Switzerland. A “self-made historian,” he followed the events of World War II closely—he was a middle school student at the time—and he came to love studying the planes, especially the military aircraft, that he saw flying overhead. On his parents’ farm, he milked cows; he found the experience so difficult that it hardened his resolve to attend Bakersfield College. There, Miller initially struggled with depression, but things changed when he reconnected with fellow student Dorothy Alice Worley, a girl whom he’d dated in high school. They married shortly before he transferred to the University of California, Berkeley, to finish his mathematics degree, which he did, in 1953. Dorothy gave birth to the first of their eventual eight children as Miller began his career at Edwards Air Force Base in the Mojave Desert. Even his limited experience with computing in college had shown him that “Computers were the way to go,” and at the Air Force base, he worked on early computer programs to evaluate aircraft performance; he later became chief of the Technical Support Division overseeing the testing of the space shuttle. Over the course of this remembrance, Miller offers some compelling historical details and technical information, including his memories of hearing about the bombing of Pearl Harbor when he was a young boy and his encounters with early computer-programming software as an adult. He also presents intriguing tidbits from his and his spouse’s personal histories; Dorothy’s family tree, for instance, extends back to early California settlers. However, the chronology of the memoir’s first half is somewhat erratic and difficult to follow, and the second half dwells on uninteresting details at times, as when the author reproduces organizational charts from the base where he worked.

A sometimes-engaging memoir of a space-travel technician that’s hampered by occasional banalities.