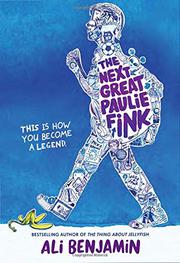 THE NEXT GREAT PAULIE FINK

Starting at a new middle school can be a horrifying experience for anyone.

Seventh-grader Caitlyn finds it harder than she ever imagined. For one thing, she’s expected to help take care of the goats—and the kindergartners. Plus, none of her new classmates appear to play by the same social rules as her old middle school. Instead of trying to be cool, everyone at Mitchell stands out, and they do it on purpose. Even a kid who’s no longer there stands out. When Paulie Fink, legendary for his pranks, doesn’t return for seventh grade, his old classmates miss him so much they decide to hold a contest to name the next great Paulie Fink. Caitlyn, as the most objective person in the class, serves as organizer, judge, and jury. But by the time the next great Paulie Fink is named, Caitlyn understands that it’s far more than one person they’re trying to save. A story with massive heart, Benjamin’s follow-up to The Thing About Jellyfish (2015) proves this writer’s incredible wit, charm, and ability to navigate deep questions while tapping directly into the middle school mindset. The novel is rare for the ease with which it combines ancient Greek studies with modern-day issues such as bullying and change, helped along by a delightful multiracial cast. Diversity is communicated mostly via naming convention; Caitlyn seems to be default white.