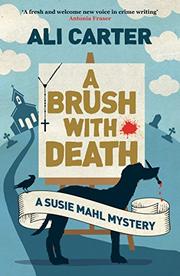 A BRUSH WITH DEATH

An English pet portraitist uses her keen perspective to probe the mysterious death of one of her rich customers.

Though she doesn’t come from wealth herself, Susie Mahl is all too acquainted with what title, family, and some money bring. In her job as a pet portrait artist, she rubs elbows with many of Spire’s oldest and most well-established families, whose word of mouth is vital to her business. She got the commission to paint Antonia Codrington’s deerhound, Situp, through her well-received portrait of a dog named Harriet some years ago. And her mastery of the niceties has made her a regular feature at Beckenstale Manor, where Lord and Lady Greengrass—Alexander and Diana—Harriet’s family, hold court. While getting to know Situp for his close-up, Susie is summoned to Diana’s side when Alexander suddenly dies on the local church grounds. Diana seeks Susie’s steadiness and support as she navigates the details of the will with her son and daughter-in-law, Arthur and Asquintha. Well understanding Diana’s inability to speak her mind about Asquintha’s fitness to take on the title and the responsibilities that will now fall on her as Diana’s rule at Beckenstale comes to an end, Susie takes on the unusual role of ad hoc lady-in-waiting, navigating Diana’s world while learning all about the associated help. Already overwhelmed by the minutiae of Alexander’s will, Susie scarcely knows how to react when it comes out that Alexander’s death may have been foul play. If only she can transition from pet portrait artist to detective, with an eye on both upstairs and downstairs, she may be the one who learns the truth about what happened to Alexander.

The heroine’s uniquely comprehensive view of both the wealthy and their help is squandered in a debut more interested in expounding the details of estate law than going beyond the predictable.