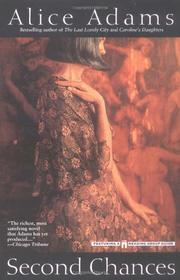 In characteristic hushed, mannered, pallid style, Adams (Superior Women, 1984, etc.) now takes on the hopes, fears, losses, and (illusory) gains of six affluent old ("very, very old") friends entering the "false spring" of early advanced age in a comfortable, featureless, falsely vernal California enclave called San Sebastian. Of the six, Dudley, a journalist, and Edward, a gay poet who stopped producing poems 15 years ago, have known each other longest: grew up in Boston and met before each met the love of a lifetime, whom both now fear will leave them—Dudley because husband Sam has lost the power to palm and is growing restless, as in the old days; Edward because his younger (50) lover Freddie has newly become a gay-rights activist and is making loads of handsome acquaintances in San Francisco marches. Celeste, the recent widow of handsome, powerful ex-reporter Charles, fears loneliness and disease; and her friends fear for her, because site has token up with a young (50) Charles-lookalike named Bill, whom no one has met but of whom everyone is suspicious. Polly, a lover of Charles' before Celeste met him in the 50's, has taken to secreting hoards of cash and delivering them by night to poor Mexican families on the outskirts of San Sebastian, and now she's taken one of the Mexicans, a young (50) mechanic, as her lover, meanwhile, she fears a recurrence of cancer. Into this wan drama enters pale Sara, young (40) niece of Celeste, whose mother has died and whose lifetime causes (pacifism, rights of the poor) have lost luster, and so who involves herself in the old folks' problems, mostly to good effect (though Sam dies and Freddy does leave Edward); later, she finds the love of her lifetime in the form of an ex-college boyfriend, and settles into a period all the San Sebastian crowd look back on nostalgically: yes, middle age. Artsy, cluttered with digressions and mannered speech, but still hinting at the tragic ironies involved in reflecting on and trying to look forward to lives already spent.