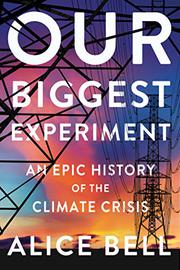 An Epic History of the Climate Crisis

Broad-ranging history of the catastrophic crisis that is well underway.

Bell, a climate activist based in London, opens her account with a moment that will come as news even to readers versed in the literature: when a scientist and women’s rights activist named Eunice Newton Foote demonstrated in 1856 that “an atmosphere heavy with carbon dioxide could send temperatures soaring.” The results of Foote’s experimental work were presented to the American Association for the Advancement of Science and then shelved until 2011, when a petroleum geologist chanced upon it. As Bell writes, it would not be the first time that data would be ignored. Her narrative zigzags among the Enlightenment and the present and points between, tracing how ideas about the climate as a world system came to be codified. Some of the narrative feels like a data dump, but the author’s account takes on greater force in her discussions of the near past and present, when inescapable evidence mounts to indicate how badly we’ve erred in overlooking the deleterious effects of fossil fuels. And it is we, collectively, who have brought this on. Although “the climate crisis has been and remains a problem of elites’ making,” enriching a handful of mostly White men, it is a problem that has been aired in the past and then brushed aside time and again. Bell is at her best when recounting these frequent observations, many of which were taken positively, as when a Swedish glaciologist argued that the retreat of glaciers around the world was really an example of “climate embetterment.” It has become clear that it is not an improvement, and Bell warns that we have to remake the world’s economy while also adapting to the effects of climate change already in motion—“and we have a rapidly vanishing snippet of time in which to do all this.”

A touch scattered but of interest to anyone concerned with climate change and our long, lamentable history of ignoring it.