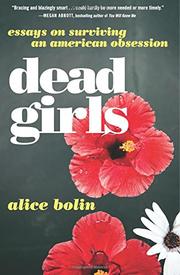 Essays on Surviving an American Obsession

In this engrossing debut collection of essays, Bolin (Creative Nonfiction/Univ. of Memphis) looks at two things: America’s cultural obsession with dead girls in works of literature and on TV and Los Angeles from the perspective of both a newcomer and a veteran.

“Our refusal to address warning signs that are so common they have become cliché means we are not failing to prevent violence but choosing not to,” writes the author, the former nonfiction editor of Electric Literature’s literary magazine, Okey-Panky. In fact, according to Bolin, Americans demonstrate a specific fascination with watching women die on screen, seeing them lose control over their lives to abusive husbands and societies, and, most crucially to her story, investigating the circumstances around their murders. To study these phenomena, the author explores shows like Twin Peaks, True Detectives, and Pretty Little Liars, among others. “If you watch enough hours of murder shows,” she writes, “you experience a peculiar sense of déjà vu…the same murders are recounted again and again across shows.” Interwoven with these analyses of pop culture is the story of the author’s arrival in LA, broke, friendless, and with not much awareness of life under the sunny Californian sky. She drew many impressions of the city from the work of Joan Didion and Raymond Chandler, among others, who have painted a picture of a unique, bewildering city: “I was impressed by the unnerving sense of a city that sprang up overnight and sprawled like an invasive species over the landscape.” Bolin’s LA story becomes exemplary of her insights about female-obsession culture, from her wacky roommates to her boyfriends to her eventual private and public writing practices. The author’s voice is eerily enthralling, systematically on point, and quite funny, though at times readers may not fully understand the motives behind their laughter.

An illuminating study on the role women play in the media and in their own lives.