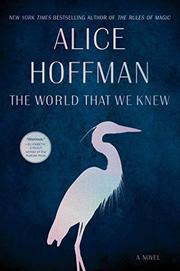 THE WORLD THAT WE KNEW

In this tale of a young German Jewish girl under the protection of a golem—a magical creature of Jewish myth created from mud and water—Hoffman (The Rules of Magic, 2017, etc.) employs her signature lyricism to express the agony of the Holocaust with a depth seldom equaled in more seemingly realistic accounts.

The golem, named Ava, comes into being in 1941 Berlin. Recently made a widow by the Gestapo and desperate to get her 12-year-old daughter, Lea, out of Germany, Hanni Kohn hires Ettie, a rabbi’s adolescent daughter who has witnessed her father creating a golem, to make a female creature who must obey Hanni by protecting Lea at all costs. Ettie uses Hanni’s payment to escape on the same train toward France as Lea and Ava, but the two human girls’ lives take different paths. Ettie, who has always chafed at the limits placed on her gender, becomes a Resistance fighter set on avenging her younger sister’s killing by Nazis. Lea, under Ava’s supernatural care, escapes the worst ravages of the war, staying first with distant cousins in Paris (already under Gestapo rule), where she falls in love with her hosts' 14-year-old son, Julien; then in a convent school hiding Jewish girls in the Rhone Valley; then in a forest village not far from where Ettie has partnered in her Resistance activities with Julien’s older brother. While Lea’s experiences toughen and mature her, Ettie never stops mourning her sister but finds something like love with a gentle gentile doctor who has his own heartbreaking backstory. In fact, everyone in the large cast of supporting human characters—as well as the talking heron that is Ava’s love interest and Azriel, the Angel of Death—becomes vividly real, but Ava the golem is the heart of the book. Representing both fierce maternal love and the will to survive, she forces Lea and Ettie to examine their capacities to make ethical choices and to love despite impossible circumstances.

A spellbinding portrait of what it means to be human in an inhuman world.