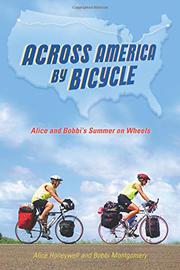 ACROSS AMERICA BY BICYCLE

Alice and Bobbi's Summer on Wheels

by Alice Honeywell and Bobbi Montgomery

Though their idea may have seemed outlandish to onlookers and some family, Honeywell, a writing consultant, and Montgomery, a former English teacher, boldly embarked on a 13-week, 3,600-mile journey beginning in Astoria, Ore., and ending in Bar Harbor, Maine. From day one, narrator Montgomery writes of the many initial minor mishaps that spurred an “on-the-road policy” agreement between the two 50-somethings, which covered things like braking too abruptly and double-checking rest-stop locations to prevent injury and forgotten belongings. The authors faced many challenges, like navigating heat-baked western Montana, encountering fires in the northern plains, sleeping in tents, eating freeze-dried food and battling allergies. Pedaling at ten to 12 miles per hour, the impediments mounted, but a variety of local “road angels” generously offered travel assistance along the way. Whether crossing a windswept bridge over the Columbia River, navigating inaccurate maps or narrowly skirting oversized logging trucks and treacherous traffic, the authors logged 60-70 miles a day, even as family concerns loomed (e.g., Honeywell’s husband fell seriously ill prior to their departure). Incredibly, their shared confidence never waivered. With periodic rest days, rendezvous with their husbands and motel/diner-food pit stops, both intrepid women held true to their intent not to race through the experience but to “absorb” the American landscape. Photographs pleasingly accent the chronicle along with final chapters detailing each woman’s poignant closing reflections, an inquisitive Q&A and their separate pannier inventories. Told with panache and a wholesome, modest sensibility, Honeywell and Montgomery’s voyage became a supreme exercise in patience, determination, self-sufficiency and unwavering friendship. And the daring duo isn’t finished—a north-south, border-to-border trip is in the works.