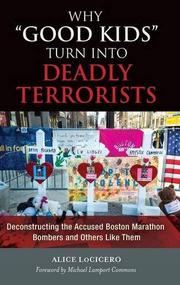 Deconstructing the Accused Boston Marathon Bombers and Others Like Them
by Alice LoCicero
BUY NOW FROM
AMAZON
BARNES & NOBLE
LOCAL BOOKSELLER
GET WEEKLY BOOK RECOMMENDATIONS:

A scholarly but accessible analysis of young terrorists that draws on behavioral and social science.

In this book, LoCicero (Creating Young Martyrs, 2008) explores the complex interplay of personal and cultural factors that produces terrorists. She particularly focuses on the two men who were accused of carrying out the 2013 Boston Marathon bombing while also surveying the spectrum of youth violence in America. Along the way, she blends in her own perspective on the attack, which was in her hometown, with her experience as a clinical psychologist studying traumatized youth worldwide. The title reflects the dissonance between Tamerlan and Dzhokhar Tsarnaev’s alleged deeds and the seemingly “normal American kids” that their friends, teachers and neighbors thought they knew. LoCicero convincingly shows that the brothers fit a pattern of young immigrants caught between conflicting identities and loyalties who become susceptible to extremism after personal crises, parental loss or neglect, drug abuse or financial setbacks. She devotes an entire chapter to how terrorist organizations recruit such people, arguing that behind every child soldier or young terrorist, there’s an adult recruiter who profits. Her prescription for preventing terrorism is to short-circuit such recruitment—first, by improving dialogue and engagement with young people, and second, by reducing the social injustice and conflicts worldwide that breed grievances. Hard-liners may equate trying to understand terrorists with excusing their actions, but the author reasons that simply labeling them evil or insane, and relying on incarceration or assassination, does little to prevent future acts. LoCicero often makes her case with great clarity and precision. Sometimes, however, there’s needless repetition; for example, she reminds readers eight times that the boat on which Dzhokhar Tsarnaev was caught was docked in Watertown, Massachusetts. On the other hand, she also constructs her arguments in ways that any layman can understand. The superbly researched, clearly cited book provides a wealth of resources for further reading. LoCicero’s stated goal for her book is “to reduce terrorism and reduce prejudice against foreign-born, young Americans, simultaneously.” That’s a tall order, perhaps beyond the reach of a single work, but she has made a significant contribution to the cause.

An excellent resource on terrorism for professionals and lay readers alike.

TERROR IN THE NAME OF GOD
by Jessica Stern
Nonfiction

THE BROTHERS
by Masha Gessen
Nonfiction