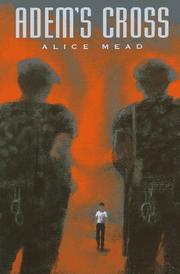 Adem, a 14-year-old Albanian, lives in Kosovo, a former province of what was Yugoslavia and is now controlled by the cruel and capricious Serbian military. Life for Adem is grim under the new regime, with food, water, and electricity shortages; worse is the constant persecution by Serb soldiers. The Albanian policy of passive resistance is fine, but when the Serbs become aware of it, retribution is swift and terrible. When his beloved older sister is gunned down after reading a poem to protest the proposed blowing up of a river, Adem and his family are singled out as troublemakers. As Adem is returning from an illicit visit to a friend one night, three soldiers accost him, crushing the bones in his hand with their boots and carving a large Cyrillic cross, the symbol of Serbia, on his chest with a pocket knife. He makes it home—barely—but knows that the persecution will not stop. He resolves to leave, setting out across the mountains. Mead (Junebug, 1995) shows dreadful aspects of the Balkan conflict by depicting the suffering of the people involved. The story is not a pretty one, but it makes some powerful points about innocent people caught up in ethnic struggles and the horrors of life under a totalitarian regime. (Fiction. 10+)