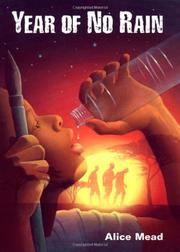 YEAR OF NO RAIN

The year 1999 in South Sudan was one of no rain and little mercy. Stephen Kajok’s father, a soldier, has gone away and never returned, two younger brothers have died—one of malaria, one of diarrhea—and now there are only three members of the Majok family left. When Stephen’s mother is killed and sister Naomi is missing, Stephen, his friend Wol, and other refugees find themselves on a journey to find a hospitable refugee camp. Mead puts civil war in human terms through the eyes of one young boy. In the context of an artfully told story, much is told about how war works. The government has discovered oil and is clearing the tribespeople from the land; the rebels raid villages, kidnapping boys for fighting and girls for selling; and families are caught in the middle. The history, the land, and the determination of a band of refugees to care for each other are vividly evoked in this important work. (map, introduction) (Fiction. 8-12)