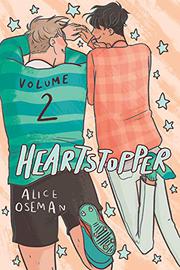 The sequel to Heartstopper: Volume 1 (2020) continues Nick and Charlie’s story as they discover new joys and hardships in their budding romance.

Panels framed in diary pages at the beginning quickly recap the previous entry in which the British boys’ relationship blossomed from a platonic friendship to something more, culminating in a kiss. But their relationship status—and how Nick, who previously identified as straight, feels about it—remained up in the air until now. This title documents how their relationship morphs into something more tangible and the issues that come along with that evolution. Nick must confront personal confusion and fear surrounding his sexuality while Charlie navigates being in a somewhat secret relationship with someone who isn’t yet out of the closet. Illustrated in the same distinctive style as the first volume, the gentle blue shading and the dialogue’s handwritten lettering lend a casual, human atmosphere to the story and its characters. Creative transitions from panel to panel and in the gutters of the pages shake up the layout and add artistic flair. Nick and Charlie’s lighthearted and tender romance is delightful, and the genuine heart present in the characters makes for a wholesome and uplifting ride. Nick and Charlie appear White; there is some racial diversity among side characters along with positive representation of a trans character.

Incredibly lovable from start to finish.