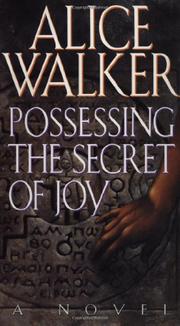 POSSESSING THE SECRET OF JOY

Here and there tantalizing remnants of the writing that made The Color Purple such a critical success, but for the most part Walker's latest is held hostage to an agenda—the eradication of female circumcision in Africa and the Middle East—a cause to which she will be contributing a portion of the royalties. A range of voices, including husband Adam, son Benny, and the character Tashi herself, tell the story of the Olinka girl who made a brief appearance in The Color Purple. Married to Adam, the young African-American missionary who took her back to the US, Tashi has suffered intermittent periods of madness since she was brutally circumcised as an adolescent in a remote guerrilla camp in Africa. It's a madness that has required hospitalization and treatment by a range of analysts, including the great Jung, who puts in a cameo appearance here. Though her older sister had bled to death from the effects of the operation, Tashi chose to have it done because she felt it would make her "...completely woman. Completely Africa. Completely Olinka." The operation also was responsible for a difficult delivery in which her son Benny was brain-damaged. Helped by therapy, her grief turns to anger: she returns to Africa and murders the old woman who performed the operation. Sentenced to death, Tashi, who feels neither guilt nor fear of death, is finally at peace because an anthropologist tells her about the mythic causes of the practice: the early African woman, "the mother of womankind," was "notoriously free" of both sexual guilt and circumcision; invading tribes and Arabs were responsible for its imposition. Dying, Tashi finally possesses the "secret of joy": the resistance to what is evil. A pastiche of New Age mysticism, dubious history, and feminist ideology tied to a storyline that points a moral, heavily underlined, rather than one that grows out of a tale. Female circumcision is a terrible travesty, but neither it nor Walker's talent is well served by this overwrought novel.