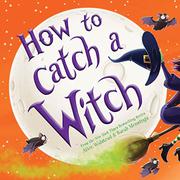 HOW TO CATCH A WITCH

Another holiday title (How To Catch the Easter Bunny by Adam Wallace, illustrated by Elkerton, 2017) sticks to the popular series’ formula.

Rhyming four-line verses describe seven intrepid trick-or-treaters’ efforts to capture the witch haunting their Halloween. Rhyming roadblocks with toolbox is an acceptable stretch, but too often too many words or syllables in the lines throw off the cadence. Children familiar with earlier titles will recognize the traps set by the costume-clad kids—a pulley and box snare, a “Tunnel of Tricks.” Eventually they accept her invitation to “floss, bump, and boogie,” concluding “the dance party had hit the finale at last, / each dancing monster started to cheer! / There’s no doubt about it, we have to admit: / This witch threw the party of the year!” The kids are diverse, and their costumes are fanciful rather than scary—a unicorn, a dragon, a scarecrow, a red-haired child in a lab coat and bow tie, a wizard, and two space creatures. The monsters, goblins, ghosts, and jack-o'-lanterns, backgrounded by a turquoise and purple night sky, are sufficiently eerie. Still, there isn’t enough originality here to entice any but the most ardent fans of Halloween or the series. (This book was reviewed digitally.)

Not enough tricks to make this a treat.