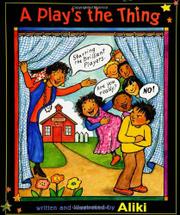 A PLAY’S THE THING

by Aliki & illustrated by Aliki

Inventive and jolly, Aliki tells a tale in her familiar comic-strip style, with shiny bright colors and enough sly references to convulse adults, even if the kids sail past them. Miss Brilliant, who must have gone to the same teachers’ college as Ms. Frizzle, announces to her class that they are going to put on a play based on “Mary Had a Little Lamb.” Her multicultural cast hops to with a will, except for José, who bears a passing resemblance to a certain Pierre who didn’t care and who spends almost the whole story acting out against everyone else. They write the script—Miss Brilliant assigns them their roles (Bandana, whose English isn’t big yet, is a musician; Steffi, who uses a wheelchair, is the narrator)—lines are written and learned, costumes and scenery prepared. The parents are invited, and it’s a great success even for José, who not only plays the teacher but whose mom leaves work early to see him. The children are a rainbow of the American classroom, and the lessons gently taught. (Picture book. 5-9)